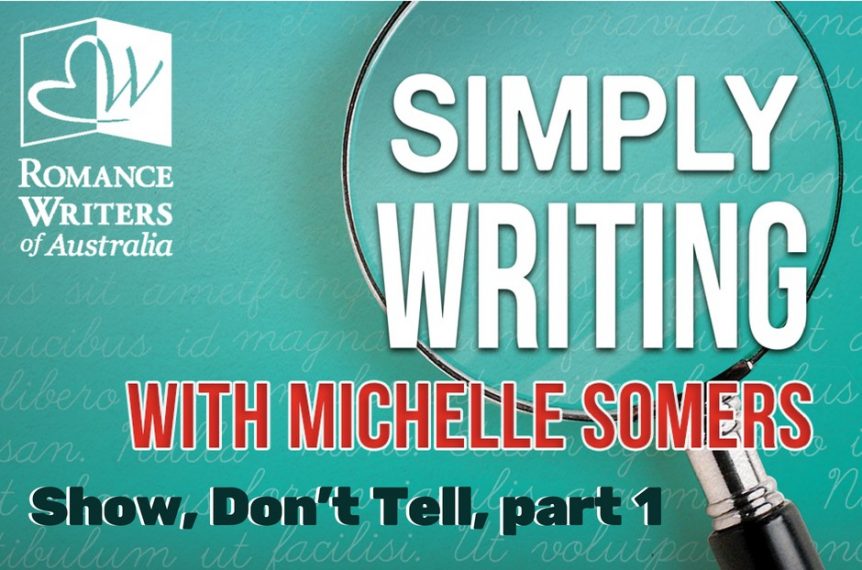 I know. There are so many blogs, writing craft websites and books available on the subject, what could I possibly add to make such a well-covered topic clearer?

For the purpose of today’s post, I plan to visit show, don’t tell from a – hopefully – different perspective than you’ve seen it before.

Let’s focus on one specific point: how to identify the difference between showing and telling.

So many times we edit then re-edit our work, trying to change those telling sentences into show, yet often we miss some, or make the mistake of thinking we’ve shown when we haven’t.

First, let’s take a brief look at how to incorporate show, don’t tell into our manuscript.

But with all this power, this knowledge, comes great responsibility. Yes, show, don’t tell but don’t overwrite. Don’t over-complicate and don’t lose your reader with big words and convoluted prose. These will only serve to slow the pace and confuse the reader.

So, now we know how to show, let’s take a look at how to check whether we’ve done what we intended to do.

What are the giveaways that tell you haven’t shown?

These include expressions such as: He thought. He felt. He was. He saw. He watched. He wondered.

I know these are great ways of linking characters to dialogue, but if you wish to cut out as much telling as possible, avoid these at all costs. As an alternative, see if you can give a better sense of your character’s state of mind or movement by using action tags.

Telling: “How can I be a better man?” he wondered.

As an alternative, italicise the dialogue to show this as an internal thought for your point of view character. You can do this for many of the standard speech tags such as ‘he said’, ‘he thought’, he wondered’, etc.

Showing: How can I be a better man? He looked to the sky, as if somehow the answer would miraculously appear.

Telling: the cat is smelly; the house was creepy

Instead of this sentence structure, add specifics to give the reader a more visual and visceral experience.

Showing: the old tabby reeked of stale tuna and neglect; the door screeched on rusted hinges, wind howling through eaves caked with a decade’s cobwebs and dust.

Replace these words with descriptive verbs to demonstrate the effect of these actions on your characters.

Example: replace walked slowly with trudged or plodded or trailed

Example: replace spoke softly with whispered or murmured or muttered

Telling: She happily said ‘I do.’

Showing: Her heart danced, her lips curving into a heady, floating-in-the-clouds smile. ‘I do.’

Showing: Dust motes danced at the light’s edge like tiny stars, the priest’s voice booming, deep with the gravel of an unsealed road. Derek’s fingers wrapped around hers, his palm warm, his grasp comforting. Home. His hand trembled. Or was it hers?

The words skipped through her mind and her heart stuttered. Their future sparkled before her, as bright as the ring he slipped onto her finger. She met his gaze, a blue she’d loved since the first moment she’d drowned in its depths.

Then she nodded, surer than she’d ever been.

Telling: ‘Out of my way,’ said Aaron angrily.

Showing: ‘Out of my way,’ snapped Aaron.

Showing: ‘Out of my way.’ Aaron shoved her aside, his dark gaze devoid of the love they once shared.

Instead, detail an example to demonstrate your point.

Be careful not to overuse this structure. Sometimes simple is better, and you really want to pick your moments to detail and deepen emotion to this degree.

Telling: After Rover died, I was lonely.

Since as far back as I could remember, I’d woken to Rover’s cold nose nuzzling my neck. Every day, he would drag at the covers, telling me I’d overslept and he was overdue for a feed. Every day he’d sprawl on the ratty blue rug, warming my toes, and every evening we’d stroll along the beach, the sand soft and cold on our feet, the salty breeze teasing our senses as the sun set and the day fell to a close.

Every day we enjoyed each other’s company, until a car sped through our quiet neighbourhood and stole his little soul from my world.

Let’s analyse further examples to see how we can first identify and then turn ‘tell’ into ‘show’:

Here’s some lines from an old book I wrote many years ago. I’ve not looked at this since 2011. Let’s see how we can make it better.

Rework: Damn her decision to go to the bar.

Telling words: She could still smell

Rework: His spicy scent lingered on her clothing, his warmth imprinted on her skin.

Telling words: could feel, the use of the point of view character’s name

Rework: His blood boiled, red-hot pressure bubbling inside his skull, threatening to explode.

Telling words: she doubted. ‘As far as she was concerned’ could also be considered telling. It could also be characteristic of the author’s – and therefore central character’s – voice. The sentence is stronger and pacier without it, but this would be a matter of preference and works either way.

She’d lived through the turmoil and picked up the pieces. Men did nothing but cheat and lie. Mr Hunkfest would be no different.

Rework: Giggles erupted from the crowd. Becky squared the slump from her shoulders and lifted her gaze to the stars. Look out New Haven – she was about to kick some serious ass.

His resulting grin was naughty and brought the slumbering butterflies in her belly back to life. “But I kind of liked the funny business.” Gabriel’s eyes twinkled, filled with suggestion, and a flagrant heat catapulted through her body.

Telling words: His grin was naughty

He grinned, his lips curving slow, sexy, stirring the slumbering butterflies in her belly back to life. “But I liked the funny business.” Heat filled his gaze, heat that slid across her skin, making her burn and boil and want.

And so ends my analysis of show, don’t tell.

I hope this glimpse – along with the many examples – has clarified what can sometimes be a sticky skill to get right.

Thanks to those who read and commented on my first post ‘Simply Writing: Hooks’ – either directly on the blog post or on social media. And thanks to you all for visiting once again.

In appreciation to everyone for visiting this post, I’d like to offer one lucky commenter a critique of three hundred words of their current work in progress, with particular emphasis on show, don’t tell.

To enter the draw, comment below on what particular point or points regarding show, don’t tell resonated with you.

Did I clarify show, don’t tell for you? What do you plan to do differently from now on to enhance your reader’s experience and deepen emotion? Are there any tips you’d like to share here to help others understand the concept show, don’t tell?

A name will be drawn on Monday 19th March, by 5pm DST and winners will be notified on the blog, so keep your eyes and ears peeled 🙂

Thanks so much for stopping by.